Recycling of your Old Product available 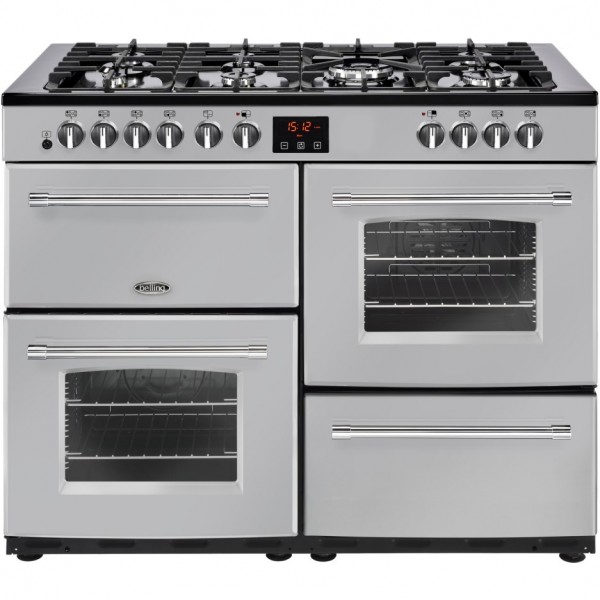 Lead times for out of stock products are estimated. We currently estimate 45 working days.

Use gas on the hob while grilling, roasting and baking with electric, on the largest range cooker typically available to the consumer.

There's always a place for a pan on the massive seven-burner hob, which provides the gas element through push button ignition.

Each position is supported by a Flame Failure safety device, which can cut off the gas supply, and there are cast iron supports to hold cookware in place.

The temperature to every position can be managed by a total of 10 control dials, so many meals can be prepared at once.

The smallest compartment is the variable rate grill, to the top left, with 31 litres of usable capacity. A solid metal handle and drop down door reveals a shelf, grill pan and trivet.

The two fanned ovens both have a 61-litre capacity, accessed by a side opening door, with two shelves, viewing windows and an interior light.

The stainless steel fans take the hot air produced and blow it all around each oven, for even cooking and balanced heat to any shelf position.

The main compartment can also be paired with a programmable timer, accessed by a digital clock. This 'minute minder' function can be set from one to 99 minutes.

To the bottom right is also a storage drawer, where baking trays and other items can be kept without taking up room in the rest of the kitchen.

Both ovens are A rated for energy efficiency, so make the most of resources used.

The defrost setting blows cold air from the fan into the oven to speed up thawing.

Easy clean enamel is inside the grill and ovens to stop grease entering the liners.

There's a slow cook function, too, which is great for making succulent casseroles.

Related links to "Farmhouse 110cm Dual Fuel Range Cooker In Silver"
Specification
There's a wider range of cooking possibilities when using the Belling Farmhouse 110DF Silver... more
Specification: Farmhouse 110cm Dual Fuel Range Cooker In Silver
Questions
more
Please ask your question about "Belling FARMHOUSE110DFSI" below:
Reviews 0
Read, write and discuss reviews... more
Close menu
Customer review for "Farmhouse 110cm Dual Fuel Range Cooker In Silver"
Write an review
Reviews will be activated after verification.
Trustpilot
No Articles to Compare
This website uses cookies, which are necessary for the technical operation of the website and are always set. Other cookies, which increase the usability of this website, serve for direct advertising or simplify interaction with other websites and social networks, will only be used with your consent.
Decline Accept